What is dogecoin mining?

People who ”mine” dogecoin are actually helping to create new dogecoins and are also helping to secure the credibility of the blockchain.

Tip: If you’re already a bit unsure about what blockchain actually is, you can learn more about blockchains here.

The word “mining” means digging, and is a reference to gold digging. Not too long ago, the world’s economies were tied to the amount of gold that could be stored in national banks’ reserves.

To expand our economies, we had to send gold diggers out to the mines to procure it.

Dogecoin works in the same way. To expand the dogecoin economy, there needs to be a dedicated group of people mining it.

However, dogecoin mining doesn’t demand strong arms, like digging for gold would, but instead it demands advanced software and strong computers.

On top of that, mining is also an important part of the blockchain’s technological infrastructure. It’s through mining that new blocks are being created, validated and added to the blockchain.

To get an even better understanding of dogecoin mining, we’ll be diving into two central elements: Proof of work and hashing.

How to buy dogecoin

Proof of work is the method dogecoin uses to validate new additions of data to the blockchain - namely, transactional data.

When you purchase something using dogecoin, the transaction will consist of certain information. This is for example your name, the seller’s name, transaction amount and so forth.

All of that information is data which can be encrypted with hashing. Dogecoin uses the hashing method Scrypt, where bitcoin uses SHA-256, and ethereum uses Keccak-256.

Scrypt is a less complicated and therefore less energy intensive hashing method than SHA-256 for example. That’s why dogecoin can also validate far more transactions (or blocks of transactions) per hour than bitcoin can.

Dogecoin can validate about one block per minute, while bitcoin validates around one block every 10th minute.

When data is encrypted with hashing, you’re no longer able to “understand” the information. Here is an example of a dogecoin transaction that’s been encrypted:

Try to type in the encrypted dogecoin code on chain.so for instance, which is a blockchain explorer. Here, you’ll be able to see what amount there’s been traded with, and who is the sender and receiver - the amount isn’t private, but sender and receiver are encrypted with Scrypt, so you can’t see who actually performed the transaction.

To keep the blockchain alive, it takes a larger collection of dogecoin transactions collected in a block, which in itself has a certain hash.

The block’s hash is very important here. Without a hash for the block, the block wouldn’t be able to be added to the blockchain, and the blockchain will thus come to a standstill. No more dogecoins will be brought into circulation, and new dogecoin transactions will not be able to be validated.

In order to make it attractive for people to spend their time adding transactions and blocks to the blockchain, those people will be rewarded a certain amount of dogecoins as thanks for their trouble. The dogecoins the person receives as a reward, are newly minted dogecoins, which haven’t existed prior to this. They’ve just been “mined”.

But how does a dogecoin miner find the exact 1:1 hash to match the new block?

They do so by “guessing”. And this is where the strong computing powers enter the picture.

A hash consists of 64 characters, where the characters can be numbers 0-9 and letters A-F.

Let’s look at the example from earlier:

There aren’t any leads to help you guess this code. It’s completely arbitrary. So to find that hash, the dogecoin miner needs to make a lot of guesses. A very strong computer - such as “The Titan supercomputer” - would be able to guess 140 million hashes per second.

That’s why it’s only a matter of time before the computer finds the correct string of code (hash) that matches the new block of the blockchain.

Example: How a dogecoin transaction could look 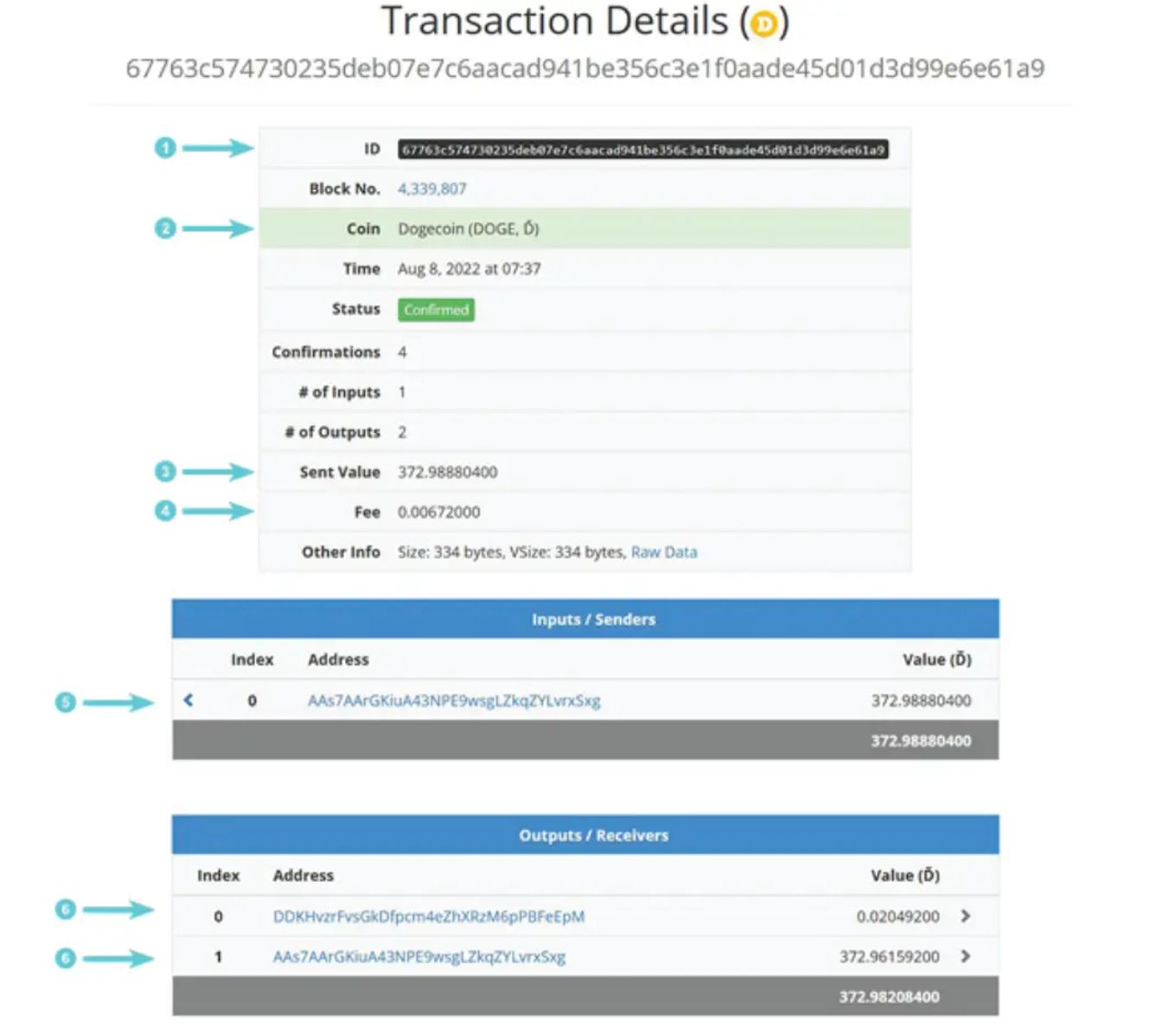 In the image above you can see a dogecoin transaction found via Chain.so – a so-called block reader, making it possible for everyone to see all transactions registered on dogecoin’s blockchain.

You could try searching for the example above by opening Chain.so in your browser and search for the transaction code:

See what the information covers in the walk through below.

The ID is the name of the transaction. That’s the encrypted code we described earlier. As you can tell, the code is very long and cryptic. You could say that the code is the reference number for each transaction.

Here, it’s noted which coin has been used in the transaction. In this instance, it was dogecoin.

There’s a fee charged to use dogecoin’s blockchain for transactions. The size of the fee is noted here, and in this example the fee is 0,007 dogecoins, which is about 0,0036 DKK.

As you can see, the sender is identified with an “address”, which covers the code name of the sender’s wallet.

The same goes for the recipient. In the example above there are two receiving addresses. Whether it’s the same person or a completely different person, we can’t know - and it’s not something dogecoin can tell you. But we can ascertain that a transaction between those two addresses occurred.

Transactions: Each dogecoin transaction results in a certain hash.

Blocks: A block on the blockchain consists of a larger collection of the hashes from dogecoin transactions.

The block’s hash: A collection of transactions, here called a block, is a long string of information. The block can then be encrypted with hashing in the same way as the individual transactions can.

Production of new dogecoins: When a person/computer guesses the hash of a block, they’re being rewarded with a certain amount of dogecoins as a reward for their work.

Alternatives to proof of work: Proof of stake

Looking for the correct hashes takes an incredible amount of computing-power. The more computing power you have, the more hashes you can guess per second - and that increases your chances of being rewarded with crypto.

It also means that people with a lot of money can invest in strong computers to then increase their chances of finding the next hash.

That creates an imbalance where it's the most financially advantaged people who mines the most dogecoin - making them even richer.

Besides that, mining with a super computer is quite power-intensive, which isn’t exactly climate friendly.

Should cryptocurrency become the new global payment system, it’s not sustainable that only 7 or 33 transactions are being completed per second. In comparison, Visa completes around 1,700 transactions every second.

Buy and sell dogecoin, solana and other popular cryptocurrencies.