If you want to trade dogecoin, you probably also want to know whether or not dogecoin is secure. That’s why we’ve written this blogpost, where we take a deep dive into the question: “Is dogecoin secure?"

There are three general topics you need to bring into consideration:

The first topic is about blockchain-technology . Here, you will get to know how a blockchain works, and how a blockchain is stringed together security-wise. The second topic touces on which countries allow the use of cryptocurrency - dogecoin included. It could put you in a difficult situation if you expected to use your dogecoins directly in stores , and the country you’re in doesn’t accept cryptocurrency.

That’s why we’re giving you an overview of countries, where crypto is allowed and where it’s illegal.

The third topic concerns the general risks and uncertainties connected to all types of crypto trades. Cryptocurrencies are volatile and unregulated assets , and it’s important that you consider this before you begin trading dogecoin and cryptocurrencies in general.

Is dogecoin technologically a secure cryptocurrency?

There are three elements of proof-of-work, which in theory makes dogecoin a secure currency:

Central to a blockchain is that it stores transaction information in large blocks of data. For example, if you were to use dogecoin to purchase a litre of milk from a person - let’s call her Anna - it would appear on the data blocks in the dogecoin blockchain.

In this connection it’s important to note that “You” and “Anna” in reality are encrypted wallets - meaning digital depots, which also are hidden behind a long string of code. In theory, no one could know who the owner of the digital depots were. 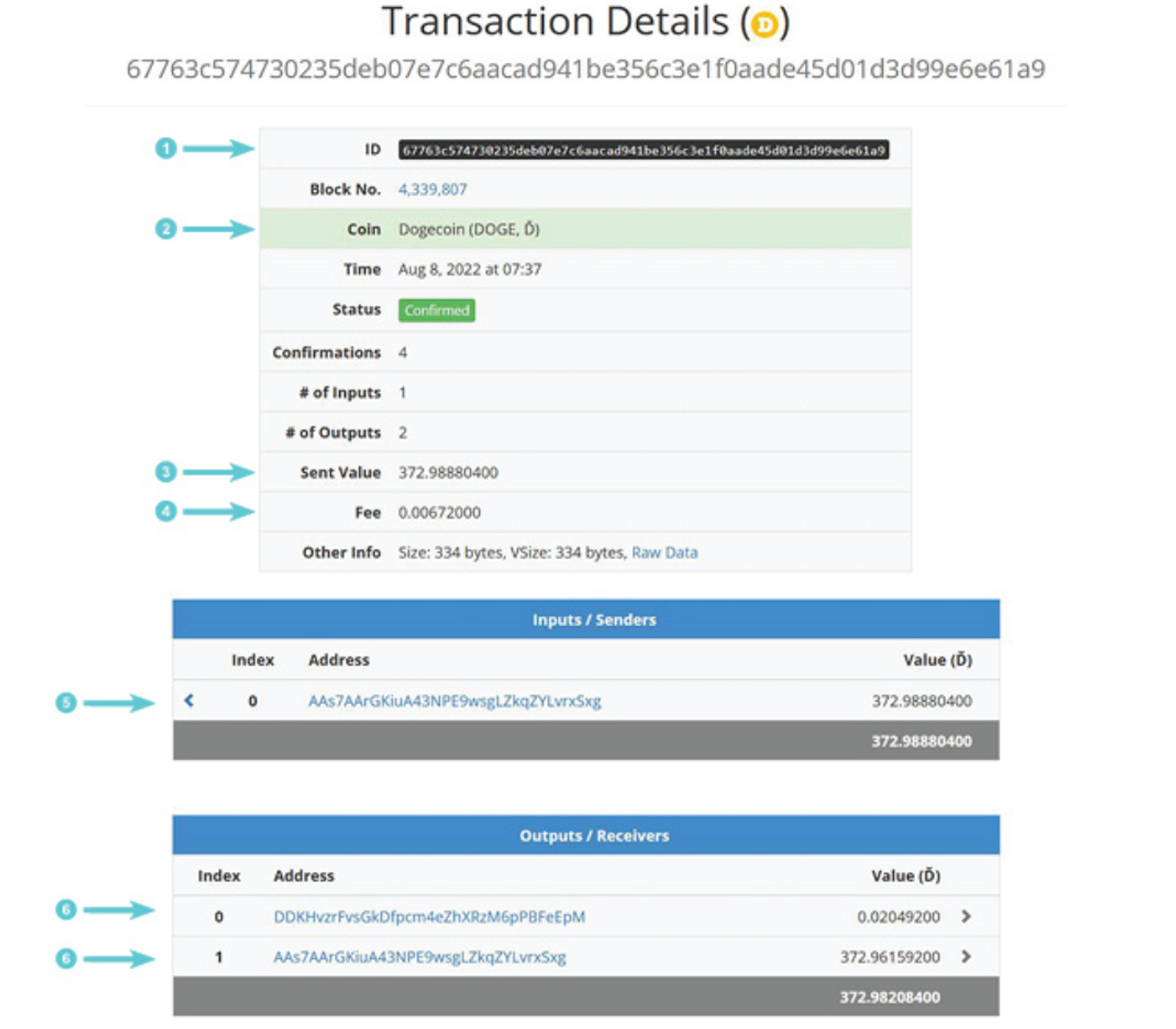 In this picture you can see a dogecoin transaction found via Chain.so - a so-called block reader, which makes it possible to see all transactions registered on dogecoin’s blockchain.

You could try and search for the example above by opening Chain.so in your browser and look up the transaction code:

See what the information covers in the walk-through below.

The ID is the name of the transaction. That’s the encrypted code we described earlier. As you can tell, the code is very long and cryptic. You can say that the code is the reference number for each transaction.

Here, its’ noted which coin has been used in the transaction. In this instance, it was dogecoin.

There’s a fee charged to use dogecoin’s blockchain for transactions. The size of the fee is noted here, and in this example the fee is 0,007 dogecoins, which is about 0,0036 DKK.

As you can see, the sender is identified with an “address”, which covers the code name of the sender’s wallet.

The same goes for the recipient. In the example above there are two receiving addresses. Whether it’s the same person or a completely different person, we can’t know - and it’s not something dogecoin can tell you. But we can ascertain that a transaction between those two addresses occured.

A blockchain is developed to be immutable. This means that any information added to the blockchain cannot be changed or edited. IT-criminals would thus not be able to enter and change or manipulate information.

In theory, this should ensure that no one could ever say that your purchase of 1 litre of milk from Anna never took place. This would be relevant if Anna were to claim that she had not received any payment from you yet, and would need to have the amount transferred again.

Here, it can clearly be seen on the blockchain that the transaction actually took place.

A last characteristic for blockchains, which makes them more secure, is the way that new blocks of data are being validated.

Because what if a hacker, let’s call him Henry, got access to the blockchain and simply added a transaction that said Henry is to receive 10 dogecoins from Anna?

If Henry could do so, it would appear as if Anna had to transfer 10 dogecoins to Henry. And when the bill reaches Anna, she may not even give it a second thought, if she were a milk wholesaler, for example.

Practically, it would be very hard for Henry to achieve this. Because before any new transaction can be added to a blockchain, it would demand complete consensus between all participants in the blockchain network. This is also called a consensus mechanism.

In other words, Henry would need to control 51% or more of the blockchain network to complete a false transaction. Here, there would be “consensus”, since Henry controls 51% of the transactions - and thus it must be Henry’s transaction overview which is more true compared to the other 49% of the network, who may think otherwise.

In reality, it’s very hard to get control over 51% or more of a blockchain, but theoretically, it’s a possibility. It happened to the cryptocurrency ethereum in 2019, where the blockchain experienced a so-called “51%-attack ”.

Tip: Get to know more about blockchain-technology here .

Which countries allow the use of dogecoin?

In relation to dogecoin being secure, an important question to consider is which countries allow the use of dogecoin. Because it can be uncertain to sit on large amounts of dogecoin or other cryptocurrencies, if you expect to use the crypto as a regular payment method.

On the opposite end, there’s countries such as China, where all trading and mining of crypto is directly banned. 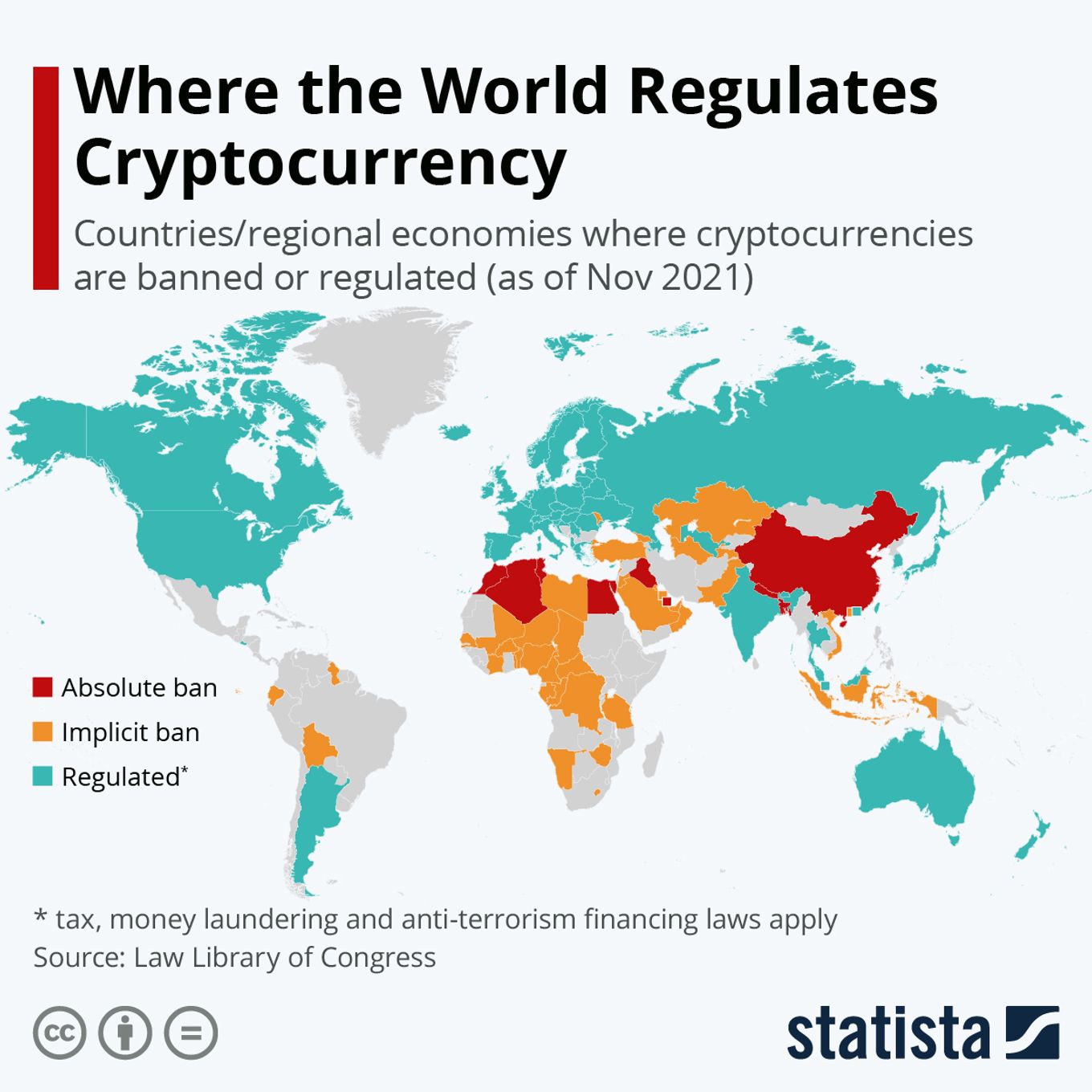 Why are investments in dogecoin and cryptocurrencies connected to risks and uncertainty?

When you trade dogecoin, there’s a risk that you could lose part or the entirety of your investment. Dogecoin and cryptocurrencies are unregulated assets which means that there’s no central authority to protect consumers.

If you have money placed in a bank, and the bank goes bankrupt, your money is protected by a central authority: In Denmark, that authority is called Garantiformuen , and covers deposits comparable to up to 100,000 euro.

But if you lose your dogecoins following a crypto platform going bankrupt, you’re not protected by any authorities or governments.

This is one of the things that make dogecoin an uncertain investment.

Besides, dogecoin is a very volatile asset. This means that the price on dogecoin can rise and fall very quickly. The more volatile an investment is, the more uncertain it is. The same principle applies to any other assets.

If you’re considering buying a house, you would probably be more careful with your purchase, if you knew that the price of the house could potentially lose up to 100% of its value from one day to the next. At the same time, there’s also a possibility that the house is suddenly worth 10 times more the next day.

This is kind of how dogecoin works. That’s why you should consider whether or not dogecoin is in line with your willingness to take risks.

A last point you need to consider is that dogecoin theoretically has an infinite supply. Actually, there are 5,2 billion new dogecoins produced every year, and there is no existing cap on how many dogecoins there may exist at any given time.

Tip: You can read more about how new dogecoins are being brought into circulation - or being mined - in our post “What is dogecoin mining ”.

This is in stark contrast to bitcoin , where there’s a maximum cap on 21 million bitcoins - where about 19 million was in circulation as of August 2022.

That makes dogecoin an inflationary currency, where bitcoin is an deflationary currency. This means that dogecoin will be less and less valuable over time, as there will always be new dogecoins brought into circulation. As long as the supply is bigger than the demand, it will result in a deterioration of dogecoin’s value.

However, it could happen that the demand of dogecoin is so large that the value rises anyway. That happened after Elon Musk and other celebrities talked positively about dogecoin in public, for example.

Tip: Read more about dogecoin’s history and how the crypto actually works here.

Oppositely, a cryptocurrency such as bitcoin will only become more valuable, because there’s a limited supply, which only becomes more limited as the remaining bitcoins are being mined. As long as the demand exceeds the supply, it will result in an increase of bitcoin’s value.

When you trade cryptocurrencies, you need to be aware that it carries a large risk. The value of your cryptocurrency can both rise and fall, and you can risk losing the entire amount you’ve invested in cryptocurrencies.
Cryptocurrency trading is done through Lunar Block. Lunar Block is not regulated by the Danish Financial Supervisory Authority (Finanstilsynet). That means you won’t have the same protection as when trading e.g. stocks or other regulated assets.

We do not counsel
We do not advise on currencies and do not make recommendations for either buying or selling. We can provide factual information about the different currencies, but past price developments are not an indication of future developments.